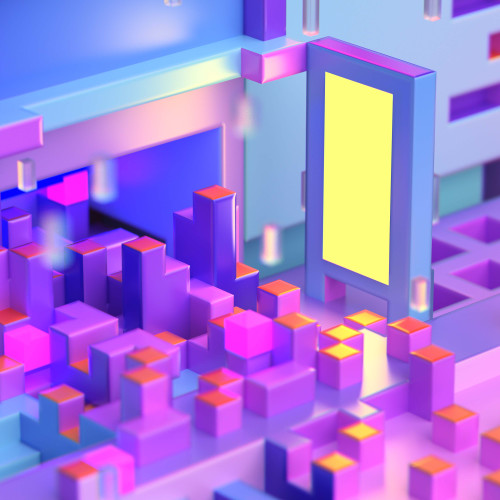 The word voxel comes from the contraction of volume and element, analogous to pixel and picture element. Voxel art is a pixel art but in a three-dimensional space. For this reason, it is a very interesting digital art that is mostly used in videogames and digital renderings.

A voxel is the three-dimensional counterpart of a pixel. As a result, voxel art operates in the same manner as pixel art. However, thanks to its three-dimensionality, its use is much broader. Pixel art can quickly create immediate artworks, with few colors and relatively low definition. Voxel art is, therefore, an expansion of this concept: the artworks remain simple, but the three-dimensionality of the spaces expand its uses. Consequently, by not having the same limitations of the pixels, the voxel can be used and arranged in any way possible.

The voxel is positioned within a three-dimensional grid and is characterized by various properties such as color, opacity, density, material, refractivity index, and speed. Therefore, the voxel is a very functional element thanks to its high manipulability. This makes it possible to create a wide range of scenarios and models, from individual buildings to entire landscapes. Moreover, the fact of being three-dimensional allows the artwork to be observable from any angle. The addition of the perspective results in a dynamic and extremely detailed art.

Although pixel art is the basis of voxel art, in a three-dimensional space it can also become a limitation. As a result, voxel art is used mainly in two different styles.

This style mostly represents a pixel art in a three-dimensional space. The image is very simple and retains the very blocky structure of the pixel. It is used as artistic representation, to abstract real objects, or for the creation of digital assets. To give the appearance of pixel art, the shade of the rendering must be flat and even. Sometimes the shadow is not used at all or its use is quite minimal and only affects the single model. Most of the times this style makes use of very bright colors to offer high contrast and saturation.

This style works using vectors to move the blocks along the three main axes (x, y, z). This offers a huge variety of applications allowing the creation of more detailed artworks. This style benefits a lot from the virtual render. Once finished, the scene is usually modified utilizing clever shading to add depth of field to give a feeling of realism. This style doesn’t benefit from a specific color palette, leaving much more freedom to the artists. Although this style tries to maintain its blocky appearance, it is not uncommon to find smoothed surfaces.

Since voxel art is a primarily digital art the shading and lighting is its main characteristic. The manipulation of blocks in a three-dimensional environment is much easier and unrestricted than in a two-dimensional one due to the absence of perspective limits. Furthermore, the light sources are more realistic as are the shadows cast by them. This is very useful in the creation of full sceneries such as indoor spaces, cities, or landscapes. However, the artist can also choose to purposefully not follow the concepts mentioned previously, resulting in a raw and simple artwork. This is mostly used in the flat variation, where the result has to give the impression of two-dimensional pixel art.

Voxels are not limited to their blocky appearance and can also be smoothed. This feature is mostly used to give the scenery a more real and less jagged appearance. The degree of smoothing is completely customizable and varies according to the author’s needs. This characteristic is very important since it allows for even more diversity and uniqueness for the creation of the artworks. The smoothing is often used for better visualization of natural features like hills, rocks, and land in general. It can also be used in animations to create a more fluid movement.

The vectors used in voxel art allow for easy manipulation of the blocks, in a similar way of construction blocks. The positioning of the blocks is completely unrestricted, allowing for the creation of very detailed models. Although the main elements are blocks, they do not represent any limit for what it can be created. Thanks to the vectors, the blocks can be adapted in every size possible and used for the creation of every detail needed, including spheres. Each block can be carefully placed to reach the desired result. This allows for a high level of detail in 3D printing as well as the rendering of virtualized images such as CT scans.

Minecraft Is the most iconic example of the usage of voxels in a videogame. It was one of the first modern games to employ such characteristics on a larger scale. Minecraft is mostly composed of voxel entities for the blocks and creatures, while the items are often square polygons with pixel-art textures. The use of block elements makes the game world appear much simpler and intuitive for the player. Furthermore, the simplicity and sizes of the voxel models allow all elements to be procedurally generated. This also affects the gameplay, which gives players great creative freedom. Moreover, thanks to the high level of detail it offers a good balance between exploration and construction.

Thanks to the simplicity with which voxel art can be created it become one of the most common elements in indie games. Moreover, voxel art can be created through many free software such as MagicaVoxel, Voxelshop, and Qubicle. Since indie games are made by individual developers or by low-budget development teams, the voxel turned out to be not too complicated or expensive as other methods. In general, voxel art expresses an ideal of simplicity and immediacy which principles are in line with those of indie games. As a result, voxels have become a graphic style, as well as a fashion, proper to indie games.

Because of its simplicity and the way it was conceived, the Voxel Art is comparable to the Legos. The manipulation, the size and the positioning of the blocks work in a similar way to the famous building blocks. Furthermore, through 3D manipulation programs, it is possible to convert a voxel model into Lego blocks and generate the relative instructions. In conclusion, just as pixels represent their digital counterpart, Lego blocks can be considered the actual material from which voxel art took inspiration.